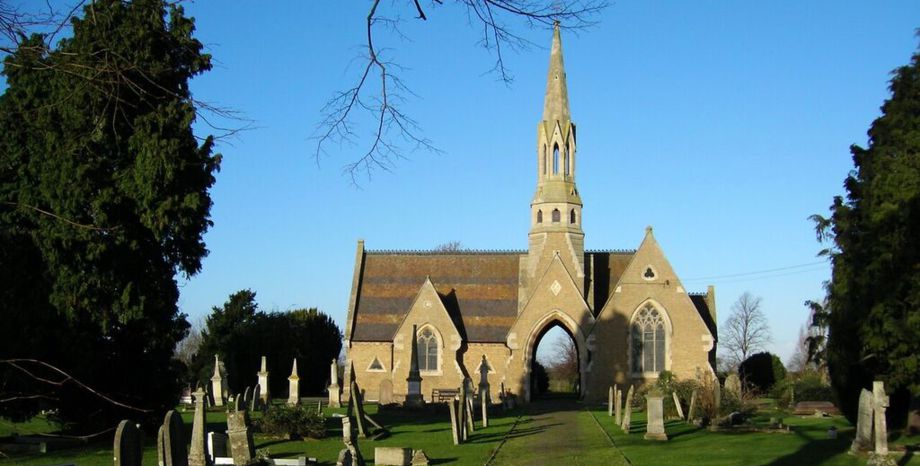 The Mortuary Chapels were built in a Gothic Revival style in1860 and comprise of two chapels: one Anglican and one non-conformist.

The Chapels are divided by a central gabled archway surmounted by an octagonal belfry and spire with the roof covered in ‘fish-scale’ tiles with fleur-de-lys ridge tiles. The original bell from the spire has recently been returned to the Chapels and is on display.

The important features in both Chapels are the contagion windows, two of only a few remaining in England. These windows were used to protect mourners from the viruses or diseases from which the deceased may have died; but allowed them to pay their final respects.

On August 22nd 1942, during WWII, German bombs fell on Ramsey, sadly killing several people. Their bodies were carried to the Chapels where they rested until they were prepared for burial.

In 1948 the Chapels officially became Ramsey’s mortuary with Swearer & Sons, undertakers and builders, carrying out the alterations.

The building is Grade II listed.

The Not Forgotten project records individuals buried in Wood Lane Cemetery, including details of their families, occupations and addresses (where possible).

Relatives are being asked to supply their own information and photographs of their ancestors and loved ones, so that they can be added to the records.

The Lest We Forget project will record details of all the Ramsey people who served in any capacity during armed conflicts.

There are War Graves in Wood Lane Cemetery, many of which are cared for by the Commenwealth Wargraves Commission. These are currently being researched by 'the Friends'.

The Parish Records project will also record the births, marriages and other events.

We also hold general information on the history of Ramsey and the local area.

These records will be available in the Chapels for use by the public.

Not Forgotten project
Lest We Forget project
PARISH Records